A History Of The Porcupine Marine Natural History Society

The Society is named after HMS “Porcupine”. This inconspicuous wooden gunboat of 490 tons, propelled by sail and paddle-wheel, spent much of her life in hydrographic survey work; she discovered and gave her name to the extensive Porcupine Bank west of Ireland. In 1869, at the request of the Royal Society and with the naturalist J. Gwyn Jeffreys aboard, she set off to dredge the deep waters to the west of the Channel. 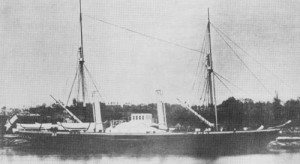 The Royal Society’s hope was to discover whether life existed at the deep ocean floor. At the time, following the azoic theory of Edward Forbes, the belief was widely held that organisms could not survive below about 600 m. On that voyage “Porcupine” successfully brought up living animals from 3000 m. and subsequently from 5000 m. It was evident from this that life must exist everywhere on the sea bed. Flowing directly from “Porcupine’s” work the great “Challenger” expedition of 1872-6 was rapidly organised. It was the greatest oceanographic expedition that there had ever been or ever will be. Further information about the early history of deep-sea exploration and the involvement of the HMS Porcupine can be found at deepseascape.

She is described as a naval paddle steam vessel built at Deptford in 1844 for surveying duties, 141 ft. long, 24 ft. beam, 13 1/2 ft. depth, 490 tons displacement. She had two funnels fore and aft of the machinery, two masts and a bowsprit. She spent most of her 37 years in home waters but served in the Baltic (during the Crimean War) and was also engaged in oceanographic cruises. More details in Porcupine Newsletter, Winter 1998/99 and more again in Tony Rice’s book ‘Voyages of Discovery’.

The society was inaugurated in 1977, at first under the simple name Porcupine. Its founders were the conchologists Shelagh Smith and David Heppell, both members of the Conchological Society. Being based in Edinburgh they were often disappointed that so many meetings of that society were held in London or at other localities in the south of England; rarely did the Conch. Soc. venture far from the metropolis. So they resolved to form a new, more geographically extensive society

Not unnaturally the first meeting of the fledgling organisation was in the Royal Scottish Museum (as it then was) in Edinburgh. This took place in February 1977, although a newsletter under the editorship of Fred Woodward had been issued in November 1976 at which a steering committee had been announced.

The interests of the society were accepted at the February 1977 meeting to embrace not just molluscs but the ecology and distribution of the generality of marine fauna and flora in the NE Atlantic. This accords naturally with the Society’s attachment to HMS “Porcupine”. Biological recording was to form an important feature of the Society’s objects and the extensive lists in the Society’s journal demonstrate the success of this aim.

The Porcupine Marine Natural History Society has since flourished and has held indoor meetings in most of the British and some Irish marine laboratories as well as in many universities and museums, although a meeting was not held in London until 2005. Additionally there have been memorable field meetings at places including Sherkin Island on the coast of SW Ireland, Guernsey, the Fleet lagoon behind Chessil Beach, the Isle of Wight, at sea off the Northumberland coast, and elsewhere.

The Newsletter, now because of its status renamed the Bulletin of the Porcupine Marine Natural History Society, has appeared steadily since the Society’s inception.  Featuring largely scientific communications, it also contains appropriate oceanographic and marine biological notes, information about the Society’s activities, correspondence and related matters. It normally appears three times a year and there have been over sixty issues since 1977. The format reflects the changing production methods of the times, beginning with cyclostyled typewritten A4 sheets it moved to computer typescript, to improved printing and to the reproduction of photographic work. It is currently attractively illustrated and bound, retaining the A4 size.

From the beginning the organisation of Porcupine has been in the hands of a large voluntary council. No restriction is placed on the council’s size and this has had a number of advantages, ensuring a quorum at meetings in any location and allowing all who wish, to have a say in the Society’s running.