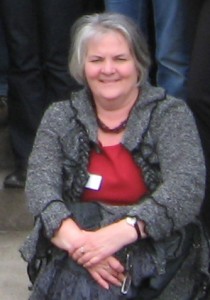 I became interested in Porcupine after meeting David Heppell and Shelagh Smith, two of the founder members, at the National Museums Scotland. The idea of fieldwork with enthusiastic people willing to share their knowledge and skills was appealing as I was very new to the National Museums Scotland and marine biology at the time. I had previously been employed as an assistant entomologist at the Natural History Museum and learnt fundamental identification and taxonomic skills. I left after five years to study zoology as an undergraduate at Royal Holloway College, London University. I developed an interest in primate behaviour and after graduating I followed this path and applied for a research assistant post at Stirling University Psychology department. During this time I took an opportunity to record live behaviour in baboons for 6 months in the gallery forests of Senegal.

I returned to Edinburgh and successfully applied for a post in the Zoology Department of the National Museums Scotland where I started work on the marine collections. I was introduced to the world of Polychaetes by the Director Norman Tebble who had previously worked on planktonic polychaetes. Since then I have been interested in

Polychaete taxonomy which is a neglected group of marine animals. Like many other soft-bodied animals they have a reputation of being difficult to identify as they do not preserve well without careful attention to narcotisation and fixation techniques. Most commercial surveys do not allow time for sorting live animals from sediment and this makes subsequent identification a challenge. On Porcupine field trips thanks to the generosity of host field stations there is time to look at live animals and to be inspired.