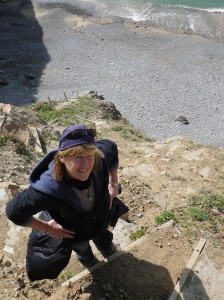 Fiona works at the Marine Biological Association (MBA) in Plymouth primarily on a climate change monitoring project called the Shore Thing (www.mba.ac.uk/shore_thing). She first became interested in the sea as a child spending hours rockpooling at St. Margaret’s Bay in Kent.  Many years later and 6 months working at Auckland University’s marine laboratory at Leigh she knew that marine was her ‘thing’.

Working and diving at the Goat Island Marine Reserve inspired Fiona to get involved in marine conservation.  Not the easiest thing to do in the 1980’s but working as a volunteer at the St. Abbs and Eyemouth Voluntary Marine Reserve led to several paid seasonal positions at the VMR and then a few years later as the full time Ranger after studying for a Masters degree at Hull University.  Due to a cut in funding at the VMR Fiona moved to freshwater working as an education officer on the river Tweed. But after six years of teaching kids about salmon, trout, Romans and the Iron Age she yearned to get back into marine so applied and got the job as the Shore Thing Project Officer at the MBA.  In 2008 Fiona attended her first Porcupine conference in Bangor and that is how her association with PMNHS began. Fiona has been on Council for 4 years, a role she really enjoys; helping to develop the Society and provide interesting activities for the ever-growing membership.